January has proven to be a month of festivals and celebrations with the Philippines.

Iloilo city has been my home for the past 4 months. On this fourth weekend of January, it gave me new friends & so much laughter for 3 straight days/nights. 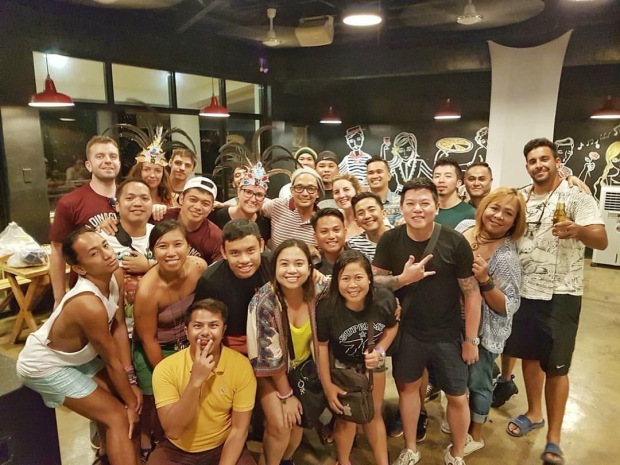 As you can see… Our weekend crew was epic.

Dinagyang festival is held in Iloilo on the fourth Sunday of January. However, there is parties going on all weekend. The weekend prior to this, there is an annual festival that occurs in Cebu (Sinulog) & Kalibo (Ati-Atihan).

During this weekend, Iloilo transforms into a tourist destination for both Philippine residents & international visitors. The Dinagyang Festival is the celebration of God’s love to the Ilonggos. The weekend is filled with performances on stages set up in various spots around the city as well as dance competitions between tribes.

The celebrations that I was a part of, included various outings with my local friends along with a massive group of couchsurfers hailing from Norway, Germany, Manila and other parts of the Philippines.

After returning home from work on Friday, I awaited the arrival of a dear friend I met during my second week in the Philippines. We were in Guimaras doing a marine survey! 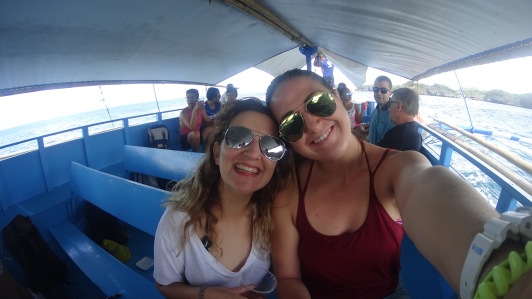 The Britt is back!! Tash & I BEFORE rum was served.

This is Tash! She’s my lil Britt that’s currently working in Dumagete as a teacher at Foundation University. She’s teaching marine biology… so she’s awesome. That’s my point.

SO. After Tash arrived, my Filipina gal pal & fellow mermaid, Riza, brought over her two Air BnB guests (one from Norway & one from Manila) & the 5 of use set out to locate the rest of our Friday night friend group! We found my roomies Conor & Jan as well as Cadoy, Delphine (we call her Ping-ping), & Matt. It was Matt’s birthday! 🙂 Happy birthday my little Australian love crunch. 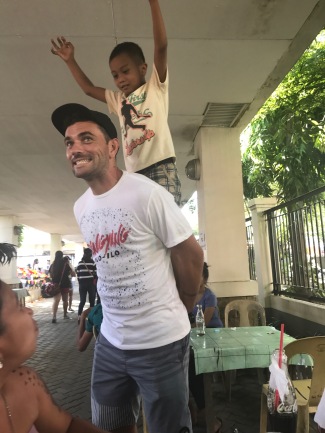 Sidenote: I was going to post an embarrassing picture of him but decided to be nice. So you’re welcome, Matt.

Afterwards, we went to Create Bistro which is owned by a good friend of ours, Pam. Then we finally went & found ourselves a stage! Ended up starting a massive dance party in front of the band that was performing and danced until like 4am.

I don’t know if I even slept 2 hours because I was so excited for the booze cruise we had planned for Saturday & I was also afraid of sleeping through my alarm… ha! I got myself out of bed bright & early, managed to get Conor & Tash up & out the door in time to meet Riza & friends to head to the wharf where the booze cruise was departing from!

After purchasing some snacks & Gatorade I knew I’d want in a few hours, everyone got on the boat! We all had a drink in our hands by 10:30am…

If you ever come to the Philippines, Tanduay Rum is usually the hard liquor of choice. Just be careful… I speak from experience.

We stopped at the Igang Bay Marine Sanctuary for some cliff jumping and swimming before we migrated over to one of the beaches within the JBLFMU Eco Park for lunch. 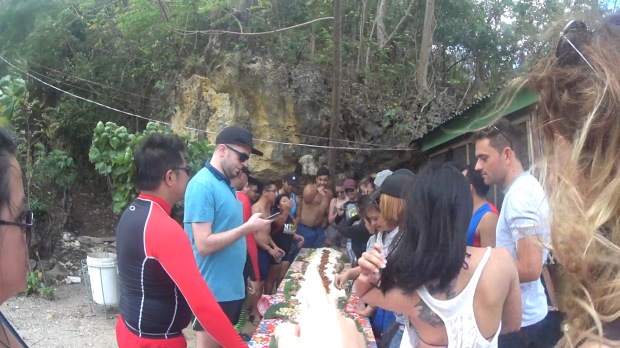 Lunch was adobo, veggies & rice. A classic Filipino dish to make my day that much better. This food set-up is called “budal” or “boodle”… or various other ways of spelling where it all sounds the same (boo-dull), in which you basically just eat with your hands & fight to the death for the limited okara. I have a video of Matt being a total creep and trying to grab the food out my hand whenever I went to take a bite. I don’t remember the last time I laughed so hard. 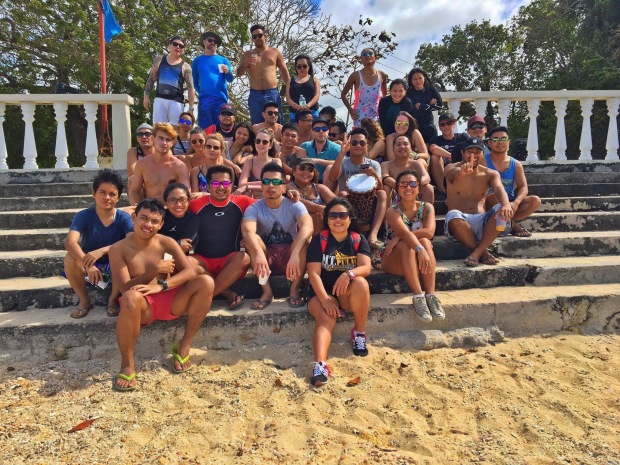 Once we got back to shore, everyone went home for a shower & maybe a quick snooze. A few of us met up again for supper but then a select few of us just got too beat by the day and decided to head home for an earlier bed time than planned. I was totally okay with it because I was dead set on going to the parade the next morning!

I should mention, they actually had shut down the cell service for most of the day during Saturday & Sunday this weekend. Strange, but I guess it’s somehow a safety precaution against bomb threats? My thoughts on this are simple: “Cool. That’s one problem solved, no bombs. What happens if I have some other kind of emergency but can’t call an ambulance?”

ANYWHO. Failing to make a plane a head of time, I woke up in the morning & rushed to see if Riza was still home so we could go to the parade together. Tash & the roomies decided not to come with, as they were insane troupers that stayed out in like 4:30am again Saturday night after booze cruise! Crazies!

Lucky for me, Riza & I communicate telepathically (apparently) & she was waiting for me outside her house because she was about to come get me at MY house. We’re awesome.

We went to the parade with her two guests, only lost one of them along the way. Then found Matt & Cadoy further down the road. We watched the parade for a few hours, which was various tribes doing mini dance performances & drumming. Before they parade, all the tribes compete to put on the best drumming & dance performances. If they win, they’ll represent the city in a national competition. Pretty cool! 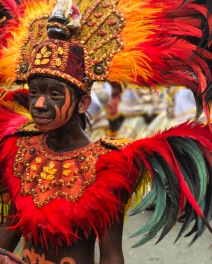 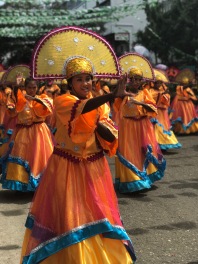 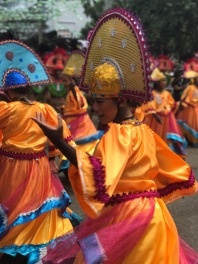 After getting cooked in the sun, we sought shade, food & drinks. 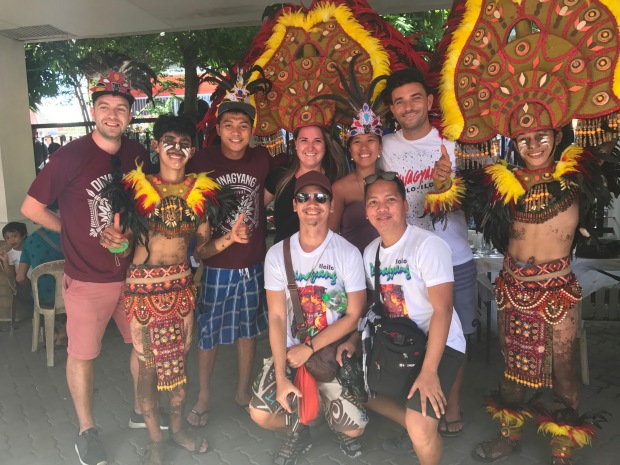 Those tribal dancers are amazing. I had that headdress on for 2 minutes and my neck was sore… Cads was also basically holding it on my head. So much respect for those guys!

Myself, Riza, Cads, Matt & Glen hung out at this spot chatting and drinking all afternoon! I was chatting with Matt’s awesome friend Mel who lives about 4 hours away from Iloilo city. She’s Australian & is in the process of adopting the most precious Filipino boy, Jerry, featured in the photo with Matt above.

He taught me a few games to play and then he made up an awesome hand shake for us. He just had his ninth birthday last week! Happy Birthday Jerry! 🙂

Dinagyang was a huge success… It was so much fun to meet so many new ad awesome people from all over the place! I laughed so hard and had so much fun! What an amazing thing to say that I got to participate in such a celebration in my temporary home town. 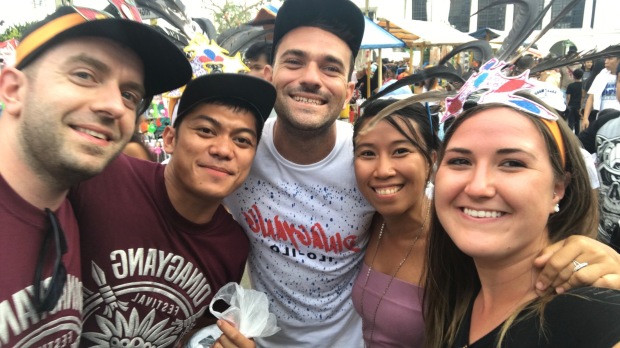 Dinagyang day crew! (Because we never made it out past like 10pm like the rest of them). Btw… We all got matching tattoos that I will NOT be posting, for various reasons I don’t want to discuss… Hahahaha!

Love all you humans ❤ xoxoxoxo

One thought on “Dinagyang Festival”

My name is Christa. I like to think of myself as a sojourner. Never in one place for too long. I want to experience new things, new places and new people! You do too? Well then we'll be great friends! Give my blog a read every time you feel like you don't know what the heck you're doing. You'll notice I have no clue either... But that's what makes life fun! We're just here temporarily after all.