Probably the worst part about adulting, is having to say goodbye to people you love. Wether that’s your family, friends or maybe even a place you love. It sucks.

Though, as hard as it is to say goodbye, we don’t have to say it. To soften the blow, my friends & I say “I’ll see you soon”. That way we can make plans for the future & be happy that there’s a possibility of seeing each other again.

What do both of these pictures (above) have in common? They are both pictures of me with a large group of people from one of my favourite places in the world (at the moment).

Bonne Bay is on the West coast (a.k.a. best coast) of Newfoundland, Canada. It’s located right in the middle of Gros Morne National Park. I have spent my last two summers here. In doing so, I have created some of the best memories with some old friends while making a bunch of amazing new friends. 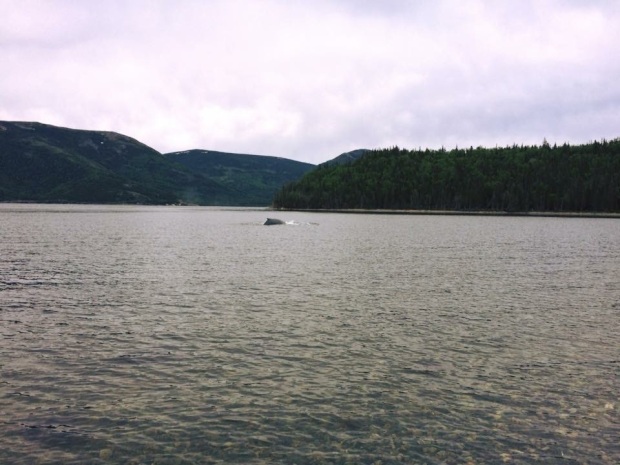 The first humpback whale I had ever seen in my life…A juvenile humpback.

Whales are my all time favourite animal. Humpback whales, in particular. June 2015 was my first ever whale experience… & it was with a humpback about 20m offshore from where our fish ecology field course was beach seining.

I knew in that moment that coming to study in Bonne Bay for the summer was the best decision I had made, after moving away from home to go to post-secondary school. So I had to come back.

Since 2k15, when I learned of this amazing & ever famous photo that Newfoundland & Labrador Tourism uses for almost all their ads, I put this hike on the top of my list. This is The Gulch hike up the waterfall at the end of Western Brook Pond*.

I knew it was an expensive hike, but decided I was prepared to spend the money in order to do it. However, I learned the name of the man who guides you up the gulch & heard he needed some extra help this summer. He was looking for people to trail sweep and assist in taking groups up The Gulch.

So naturally, I got ahold of his number & told him I would be interested in helping in any way possible. Guess what? I am now a junior guide for BonTours, in which I get to join in hikes up the gulch.

These two things were the highlights of both of my summers here in Bonne Bay… However, there were so many other memories created that will be impossible to forget.

This place changed me for the better in so many ways.

Snow covered Tablelands in May 2015. That green building is the Bonne Bay Marine Station.

Soon, I’ll be moving onto the next chapter of my life. Lately I’ve had to say “see you soon” to many of my friends that are either moving home or away from where we became such great friends. In the near future, I will also have to say “see you soon” to this amazing place that has created the most beautiful home for me these past two summers. Not to mention, I must say goodbye to the province that has housed me for the past 4 years & led me to become the strong individual I am today.

I have to keep in mind that I want to live a sojourn lifestyle. In order to do this I must keep a positive & healthy state of mind, in thinking that my “goodbyes” are not really goodbyes. So instead… I’ll see you soon.

*For more information, or to book a boat tour or Western Brook Pond and/or a hiking trip up The Gulch… Visit www.bontours.ca or www.clemstrekkingadventures.ca

My name is Christa. I like to think of myself as a sojourner. Never in one place for too long. I want to experience new things, new places and new people! You do too? Well then we'll be great friends! Give my blog a read every time you feel like you don't know what the heck you're doing. You'll notice I have no clue either... But that's what makes life fun! We're just here temporarily after all.